The 1 in 4: From Anna’s Grace – Annabelle’s Angels

** Note- Beginning on January 1, 2022, Maddie’s Footprints will be taking over for Anna’s Grace in  Greater Baton Rouge, at the request of Anna’s Grace’s Founder, Monica Alley.  We wanted to preserve these beautiful stories from the AG blog, so we are copying them here.  Thank you to all of the AG families who have shared their journeys so that others don’t need to feel alone. 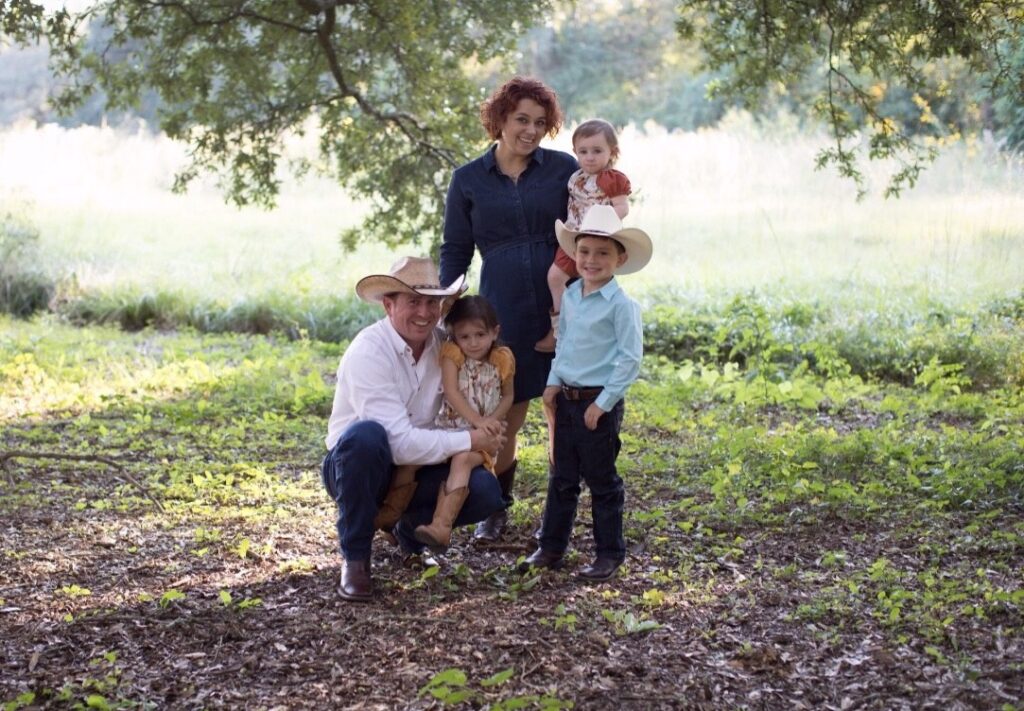 November 20, 2018 is the day our lives were forever changed. Before I tell you about that allow me to introduce myself and my family. My name is Jeri Hughes, my husband is Thomas Hughes and we have five children. Our oldest Gideon (6), Anne Marie (4), Ariana (2 1/2), our angel baby Annabelle (Stillborn at 21 weeks), and our other angel baby that we weren’t able to name that we lost at 6 1/2 weeks just this past August.

It was around our son’s birthday that I found out I was pregnant with our sweet Annabelle. She was a surprise but also very much a blessing and I was excited because we would have four beautiful children. A full house is a full heart. Raised in a big family I always wanted a big family of my own.

For my first three pregnancies I was lucky enough not to have any issues and to be very active during all of them. I thought this one would be the same…until it wasn’t. Within the first 6-10 weeks I noticed I was very exhausted. I expressed this to my husband and midwife because for me, it wasn’t normal. My husband reminded me that I now have three kids to keep up with along with my daily doings, to pace myself and rest when i could. My midwife reminded me that every pregnancy is different and to rest when i felt tired. She wasn’t concerned because i seemed fine as did the baby’s heart rate and all. I thought I was just being paranoid but something deep in my mama gut was raising a red flag.

My first ultrasound appointment came at 10 weeks, confirming that yes 110% i was pregnant and baby was OK! She was measuring right where they predicted her to be but i found her position and movements peculiar. I brushed it off though because i am not a doctor or ultrasound tech and kept reminding myself that every baby and every pregnancy is different. So instead on my way home I thanked God for our blessing and prayed for a healthy baby. In the weeks to come we would quickly learn God had other plans.

Fast forward to October, we were set to take family photos the weekend before Halloween. I had been feeling some sharp abdominal pains but had an upcoming appointment (in November) for the anatomy scan and to find out the gender so I assured myself it was okay and I would talk to the midwife about it then. It only happened when i moved or sat certain ways so it wasn’t a constant or enough to make me think the worst. During our photo shoot our photographer asked my husband to dip me a little to get the shoot and when he did i felt a pain like no other. It brought tears to my eyes, that’s when i realized, something really wasn’t right. I called my midwife as soon as i could, by then the pain was gone. It had subsided only minutes after the dip so i thought maybe a pregnant woman just shouldn’t be dipped, it’s not like i had ever been dipped pregnant before so i wasn’t sure. When i called her because the pain had gone away she told me that if it did come back just come on in and to rest.

Nearly a month had gone by and I was waiting to do my anatomy scan.That fatal day of November 20th was here. Usually my husband attended these with me but he had meetings at work and since all the others had been fine i assured him i would call him as soon as it was done. I got called back to start my scan. She started with all of the normal measurements, legs, arms, torso, head, etc.. She got to the heart and i noticed it, just a dark blob with no movement. With all of my children up until we got them to move right it was always difficult to position them to get clear pictures of all four chambers of the heart and to see it functioning so again i put it in the back of my mind. As i’m looking at her positioning I noticing even after I drank cold water before entering she wasn’t moving much and her head seemed down. When i noticed this was the exact time the tech did and she quickly pulled back the wand and told me to come back after my appointment that she would finish up because she couldn’t see all chambers of the heart. As i walked out to the waiting area I contemplated calling my husband as this calm, shock type feeling swept my body. My mind starting to race. Was something wrong with my baby? Had I ignored the signs too much? What do I do if something is wrong? I told myself, I love her anyway! For God blessed us with her and she is ours to love and protect.

As i got called back again i walked a little slower. As the tech opened the door I saw my midwife standing there. As professional as she could be she said that she wanted to see if she could help see the heart and give another set of eyes to the tech. The tech began. She tried everything she could to get her to move, then she tried turning on the sound to hear a heartbeat. I could see the sound bar was empty. She tried again, and again. Nothing. Then came the words no mother or parent ever wants to here…”I’m so sorry, but there is no heartbeat.” I froze, in complete shock. My worst nightmare had come true. My baby was gone and I’m alone. After a few minutes I mustered up the courage to leave the doctor’s office. Driving always helps me think. I immediately called my mom and my husband. As I met them all at my grandparents house, i think back and believe that telling them may have been a little harder than hearing it. Saying it out loud was admitting its truth and no one is ever prepared for that.

We were just two days out from Thanksgiving and we had a choice. Go in the next day and prepare for labor or wait until that Friday…Black Friday. A day with an entirely different meaning now. We stayed home just our little family and my wonderful mom that came over and cooked us a Thanksgiving dinner to try and make the day as normal as possible for our other children. The next day we were admitted into the hospital. Walking into the hospital knowing why we were there was one of the hardest things i ever had to do. I wanted to run away. The midwives, doctors and nursing staff however were wonderful! They always addressed my baby as just that, a baby and once they knew her name they called her by name. Something i will never forget and may seem so small but meant so much to me.

It took me over 24 hours to have her. Hours before having her, I kept praying for a miracle. Maybe they missed something, maybe she would come back to me. Instead she was born sleeping on November 24, 2018 at 3:12 p.m. perfectly formed with ten fingers and ten toes. She was perfect. After getting much time with her, a social worker came in and told us about Anna’s Grace Foundation. Before this, we had never heard of it, then again if you have never been in this position or know someone that has maybe you wouldn’t have. Not only did Anna’s Grace help us then, but they helped us in the months to come. Something I honestly wasn’t expecting, although admittedly i didn’t know what to expect. They reached out to us letting us know they understood and were there. We would soon learn these weren’t just words. Once the holidays settled down we wanted to find a way to give back and that’s when we heard about the quarter marathon that Anna’s Grace puts on. My husband being an avid runner, we thought this was perfect. I was a bit nervous about being so emotionally raw out in public but i reached deep and reminded myself this wasn’t about me, this was about Annabelle and all of the other babies we couldn’t take home.

Race day. There we were, walking into a crowd of the unknown. Trying to hold back my tears at the amount of people there to support such a cause I wound up running into an old friend, Melissa Pinkston. I had no idea of her losing her twins or their family also being supported by and supporting Anna’s Grace Foundation. Talking to her was the first time I’d heard her story and the first time that I had openly told mine. It was hard but a necessary first step to healing. The day went on, our son won the 1 mile race for his age, we won the award for best costume (our shirts) which admittedly there were a lot of amazing people, costumes and shirts out there but seeing that people noticed our shirts noticing our recent loss and grief made me feel like the entire crowd wrapped us in a big hug that we very much needed. Not only were we there raising money to support an amazing foundation, we were surrounded by amazing people. People that understood, that felt compassion and that put family first which was so amazing to see. We would soon realize that the race is only one of many ways that Anna’s Grace helps to support families just like ours. 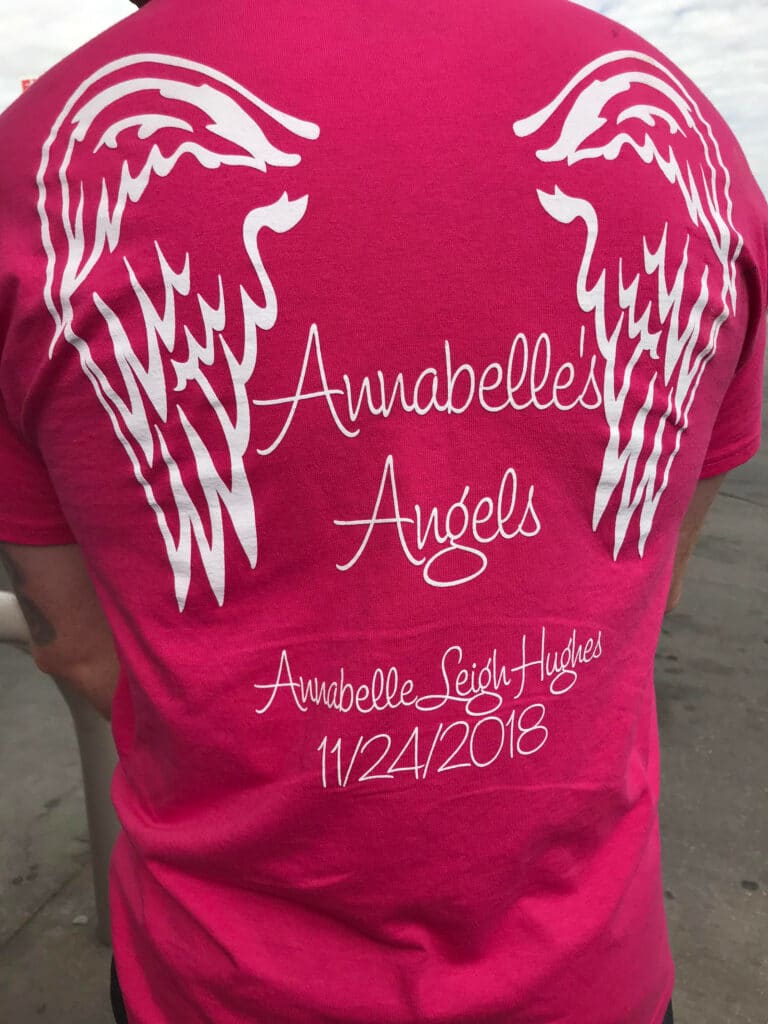 How We Can Help

How You Can Help