** Note- Beginning on January 1, 2022, Maddie’s Footprints will be taking over for Anna’s Grace in  Greater Baton Rouge, at the request of Anna’s Grace’s Founder, Monica Alley.  We wanted to preserve these beautiful stories from the AG blog, so we are copying them here.  Thank you to all of the AG families who have shared their journeys so that others don’t need to feel alone. 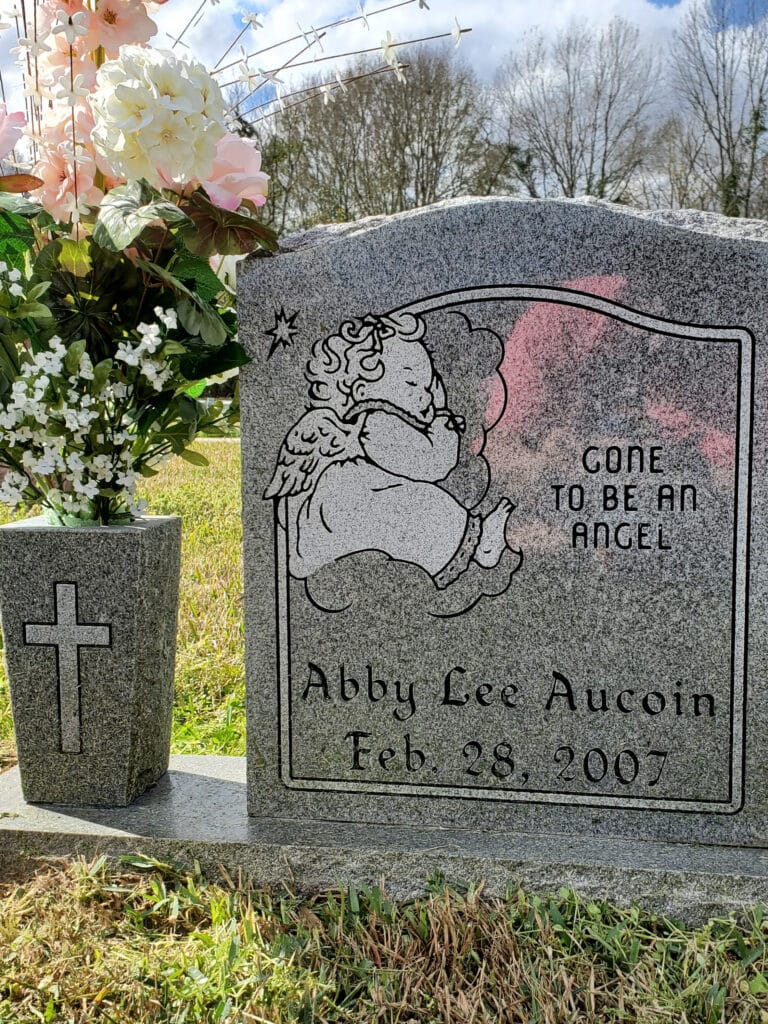 Tuesday, February 27th was like any other day. I went to work, which consisted of work on the road. I had felt some pains but assumed they were merely ligaments stretching. This wasn’t my first pregnancy, so I wasn’t overly concerned. But after arriving at home, I was just happy to be there with my husband, Rodger, and my 1-year old daughter, Hope. I sat down that evening to give Hope her last bottle of the day when I felt it. I was wet and I knew something was wrong. I began to bleed!

I called my doctor who advised me to go to the hospital to be checked. When I saw Dr. Kleinpeter, I knew things weren’t good. At 22 weeks 5 days gestation, I was admitted being 3 cm dilated and in labor. After running numerous blood tests, he came back and said the words no parents want to hear. “Something is wrong and we’re going to have to deliver. I’m so sorry but the baby won’t make it. She’s just too premature.”

On February 28th at 6 a.m. my life forever changed. I delivered the most beautiful angel, Abby Lee Aucoin. She was 12” long and was 1 lbs. 2 ozs. with a head full of dark brown hair. We were blessed she was able to live for 2 hours. The shortest and longest 2 hours of my life. The shortest because she was with us for such a short time. And the longest because we could feel her slipping from our hands. Life was no longer what we had known as our hearts were shattered.

After experience such a traumatic loss, my doctor, husband and family strongly felt like I needed a support group as no one in our families had ever lost a baby. I resisted but eventually went. What a blessing it was! Through the worst time I had found friends who are now more like family! The Simoneauxs and Neubauers … they also experienced loss of their sweet Angels (Cade and Alyssa) and were there when I needed them, and I can only hope I have been the same friend to them as they have been to me.

In dealing with the loss of Abby I was sad, angry and confused. What had I done so wrong that God would take my baby? Not that I would ever wish this on anyone, but why my baby? I thought God took care of His children, yet here I am feeling lost and hopeless. All the while l was grateful as I had Hope, who needed me as much as I needed her! Then after crying and talking to God one night it was if He spoke directly to me. He did indeed take care his child, because she wasn’t sick (after learning I had group B strep). He was getting to me! And I wouldn’t change a thing to know she is healthy in heaven running around with her friends instead of being here being sick from complications that could’ve occurred. I did go on to have one more baby, Gracie, and I believe in my heart Abby helped her to get here as I had complications with her as well.

Almost 13 years later, I’m now one of the founders of Abby’s Angel Closet. I have the opportunity, and honor, of blessing other families with gowns for their Angels, as well as gift cancer patients with things they may need during treatments. And to know it’s named after my sweet girl makes it all the better. I have had the opportunity to meet a few of the mothers we have gifted. I’m just like them but further in my journey, as it’s all new to them. The pain is always there, but if I can show them things will eventually be better in time, then I feel as though my loss wasn’t in vain.

How We Can Help

How You Can Help